Arianna is the daughter of Marcus Fox, somewhat notorious for his brash leadership of Aegis Security, two decades ago, that led to open warfare between Aegis and an unknown vampire organization (Sabbat) in the streets of Pasadena. This bloody conflict led to Aegis' holdings in Pasadena being sold to Stig-Martyr.

Marcus was also well known, at the time, as the vigilante Shadow Cross.

Marcus Fox was reported killed years ago, but Arianna would be well-cared-for, growing up in a corporate enclave in NewBos.

Now that she's come of age, she has decided to follow in her father's footsteps by joining the company.

There, she would contract out as a wastelands runner, providing security for anyone traveling there who could afford the contract.

With this position, she intends to find information on her father...

Sometimes accused of being 'harsh', Ari is impatient and generally intolerant of people who are 'destined to get themselves killed in the worst ways possible'. She is often viewed as unapproachable and she rarely smiles.

One co-worker has recently accused her of being the spokesperson for Vitamin Bitch.

Who wants to come play with Ari, I wonder? 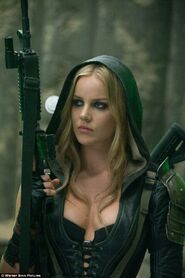 Add a photo to this gallery

Retrieved from "https://darkmetal.fandom.com/wiki/Arianna_Fox?oldid=8994"
Community content is available under CC-BY-SA unless otherwise noted.